The Philadelphia Public High School Football League won’t be playing football this fall, even though most of the state of Pennsylvania is playing on Friday nights. For many of these high school football players, football is their safe place, their lifeline, it’s their family, and it’s a potential vehicle that could change the trajectory of their lives. For these Seniors, not playing football this year could negatively impact their chances of playing college football, making it that much harder to pursue their dreams. In an effort to provide hope to a community in need, The Maxwell Football Club partnered with The Ertz Family Foundation and The Athletes’ Corner to host The Beyond The Field Senior Showcase, which was a free, state-of-the-art combine for Philadelphia high school football players. The participant fees were completely covered by donations from The Maxwell Football Club, The Ertz Family Foundation and The Athletes’ Corner – so every high school athlete who participated was able to do so without charge. 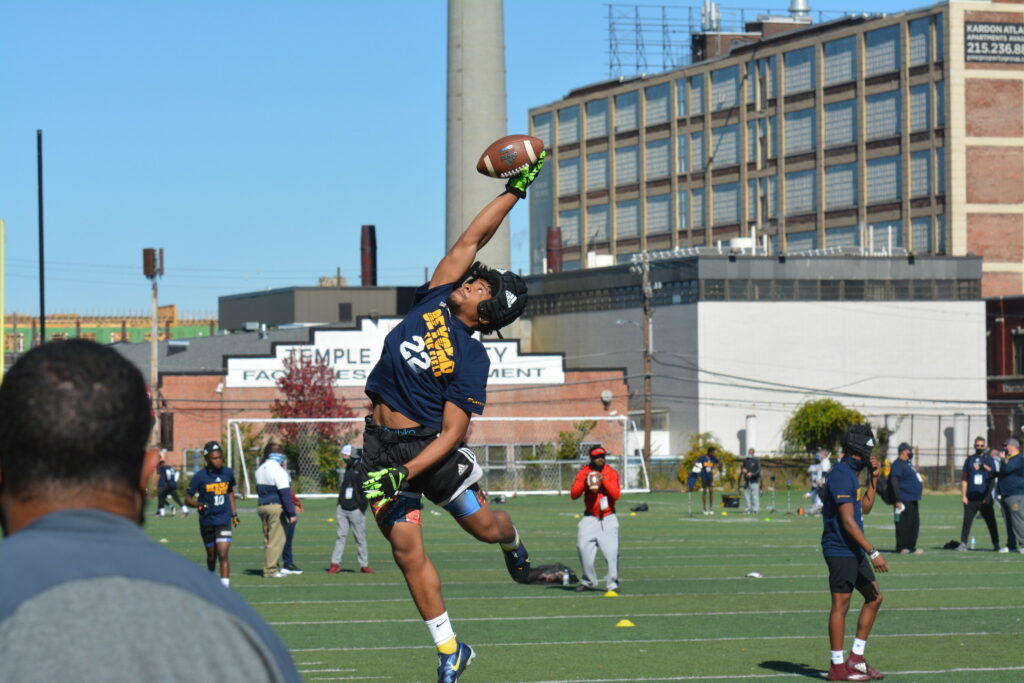 The combine was held on Saturday, October 17th, and proved to be a huge success. There were approximately 150 high school football players who attended the combine to display their skills in front of scouts and college coaches. There were more than 40 college coaches from 32 different universities who attended the combine. There were also 15 high school coaches working with the players, 7 of which have coached in at least one state championship game. These high school athletes had the opportunity to record times for the 40-yard dash, the pro shuttle, vertical jump and also performed on the field drills. Due to the pandemic, safety was of the utmost importance during the combine. The Maxwell Football Club provided athletic trainers and followed strict COVID-19 precautions – including temperature checks and masks for all combine attendees.

“So often in sports, just like in life, all you need is an opportunity. The COVID-19 pandemic put a stop to the high school football season; however the pandemic did not stop the dreams of these young athletes playing college football.  Being recruited in high school was such a unique experience and a testament to the people that helped us get to that point in our career.

“Being able to host the recruiting showcase on Saturday was truly special. The talent in Philadelphia is evident and we can’t thank The Maxwell Club enough for putting together such a professional and impactful day.”  – Zach and Julie Ertz, Founders of The Ertz Family Foundation – Zach is a Super Bowl Champion and 3x Pro Bowl TE for the Philadelphia Eagles, and Julie is 2x World Cup Champion and 2016 Olympian.

“The Maxwell Football Club (MFC) was honored to be part of this amazing day which offered so many deserving student-athletes the opportunity to display their skills in front of college coaches.The past 8 months have presented so many challenges for these young men, many of which directly impacted their education and football participation. This is just a small step to provide some normalcy for these talented young men.

“We are grateful to be partnered with organizations like the Ertz Family Foundation, Beyond the Field, and The Athletes Corner who worked hand in hand with our staff to make this day possible. The MFC looks forward to providing future programs that will provide impact for student-athletes in the Philadelphia area and other regions of the country.” – Mark WolpertExecutive Director of the Maxwell Football Club, and President of the National College Football Awards Association

The Athletes’ Corner, who also assisted in making the combine possible, is now an official executive partner of The Maxwell Football Club. The two organizations look forward to impacting communities together through the vehicle of sports.

“For me, this combine is so much bigger than helping a bunch of high school football players get recruited. For a lot of these kids, taking football away from them is actually taking away far more than Friday night lights.  It’s actually taking away their hope.  It’s taking away the belief and the opportunity to fulfill their dreams. I believe that’s what this combine was really all about, it was about giving hope to these young men. If hosting this combine gave hope to these young men, and renewed their belief in themselves – then it was a huge success. I love working with The Maxwell Football Club, the Ertz Family Foundation and The Athletes’ Corner because for all of us – this is bigger than sports. We hope to impact the lives of these kids through the sports they all love.”  – Brennen Creer, Vice President of Marketing and Media Relations for The Maxwell Football Club and Co-Founder of The Athletes’ Corner

ABOUT THE MAXWELL FOOTBALL CLUB

The Maxwell Football Club (MFC) was founded in 1935, making it the oldest football organization of its kind in America.  The MFC is primarily known for their series of 11 nationally recognized football awards that are presented annually at the professional, collegiate and high school football levels.  The MFC is home of The Maxwell Award (best player in college football), which is the premier award on the Home Depot ESPN College Football Awards Show, as well as the Bednarik Award (best defensive player in college football) which is also televised on the ESPN Awards Show.  In addition to their annual football awards, The Maxwell Football Club is also focused on making a difference in the lives of high school football players, and in their communities. Visit www.maxwellfootballclub.org to learn more about our story.

ABOUT THE ERTZ FAMILY FOUNDATION

The Ertz Family Foundation was founded in 2018 by Zach and Julie Ertz. Zach is a 3x Pro Bowl Tight End and Super Bowl Champion for the Philadelphia Eagles, and Julie is a 2x USWNT World Cup Champion and member of the 2016 Olympic team. Through their faith and desire to elevate those who need it the most, they created their foundation to help lift the community of Philadelphia. The Ertz family focuses their charitable efforts on youth sports and education and have most recently been a partner in the Beyond the Field initiative. Partnering with local non-profits, they have provided safe after school workouts for the underserved athletes when COVID-19 took their season away. In addition to the on the field portion, this program was designed to determine and find other necessary services that the kids in the most underserved, high-risk communities have lost during the pandemic—to include a safe access spot free from the growing issues of poverty, drugs, gangs, and violence. The Ertz Family Foundation works with several local organizations in Philadelphia on the Philly Bridge Project, such as ODAAP, Timoteo Sports, and FCA and have recently partnered with Jerome Bettis’ The Bus Stops Here Foundation for Pittsburgh’s Steel Bridge Project as the first partner in what they hope to be a 32 City Bridge Project to support the NFL cities. Visit their website to learn more: or follow them on Instagram.

ABOUT THE ATHLETES’ CORNER

The Athletes’ Corner is a 501c3 Non-profit organization that works with professional athletes and their foundations to help those who are struggling mentally, spiritually and physically – all through the vehicle of sports.  The Athletes’ Corner has two primary initiatives that they focus on in order to accomplish their mission; their faith-based and family-focused media platform, and athlete foundation partnerships.  Their athlete foundation partnerships are aimed to tackle things like fighting hunger and financial hardship. In 2020 alone, The Athletes’ Corner has reached nearly 40 million people with their messages of faith and family – proving that people need social media content that is more uplifting, encouraging and strengthening. Visit their website or Instagram to learn more.