By TeamErtz February 6, 2019 No Comments 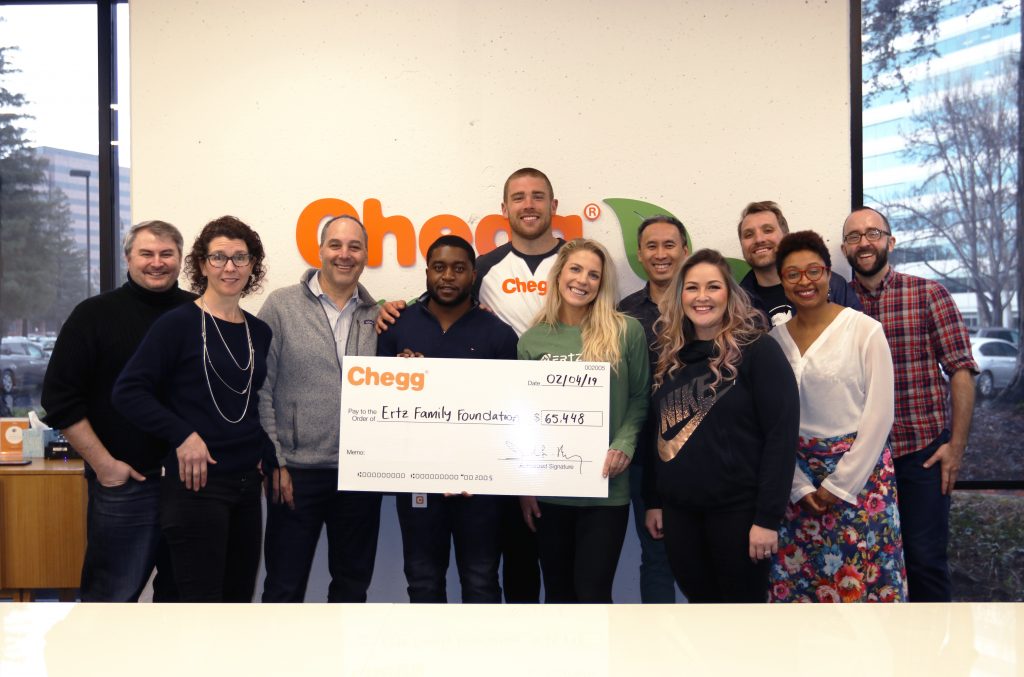 The ‘Catches for the Community’ campaign was based on Ertz’s 2018 – ‘19 season for breaking the record for the most receptions by a tight end in a single season.  To support the Ertz Family Foundation, a public benefit organization founded by Zach and his wife Julie, Chegg pledged $860.00 dollars for every first down Zach earned (66) and $1,086.00 dollars for every touchdown (8) totaling $65,448 in funds raised for education. Chegg honored Ertz’s jersey number (86) by tying campaign dollar goals to it.

“We are incredibly grateful to have partnered with Zach, Julie and the Ertz Family Foundation to support and empower youth by sharing learning through sports and education,” said Dan Rosensweig, CEO of Chegg. “Chegg is proud to be part of the Foundation’s family of donors where together we are making a difference in students’ lives.”

Ertz, a twice nominated Pro Bowl tight end, scored the winning touchdown in the 2017-18 world championship for the NFL’s Philadelphia Eagles. In the 2018-19 season, Ertz played a career-high 91.6 percent of snaps and set a single-season record for tight ends with 116 catches. He has been named NFL Players Association Community MVP for Week 5 as a result of his work to change the lives of children in Haiti through the Foundation’s scholarship program.

“Being professional athletes has afforded Julie and me privileges that very few have and we’re driven by a calling to use our abilities and platform to help children through education and sports,” said Ertz. “Chegg is our largest corporate donor and we’re very grateful for its support in providing educational opportunities for students.”

In 2018, Ertz and his wife Julie Johnston Ertz, a World Champion and starter for the U.S. Women’s National Soccer Team, established the Ertz Family Foundation. Initially, the Foundation’s work will focus on Philadelphia, the San Francisco Bay Area and Haiti.